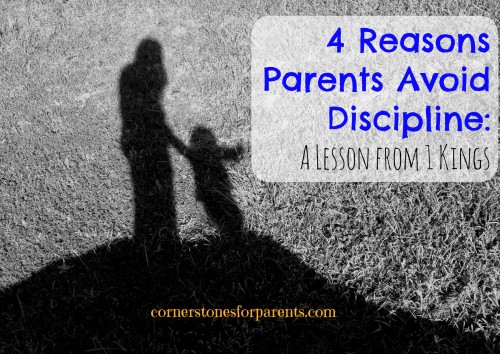 Do you ever feel reluctant to discipline your kids? If so, you are not alone – the “man after God’s own heart” did the same. This article will explore four different reasons why parents may avoid discipline and what you can do about it.

Last time, we talked about David being a man after God’s own heart and how he embodied mercy in his interactions with others. Despite this glowing accolade from God Himself, David was not without his faults which included adultery, conspiracy to commit murder and, apparently, as we will see today, poor parenting.

1 Kings 1:6 gives us a little insight into this last failing with regards to his fourth son, Adonijah:

“His father had never at any time displeased him by asking, ‘Why have you done thus and so?’”

David never displeased Adonijah. Never. Not even once did he question his behavior. If we were to put David on the permissive-authoritarian scale, he’d be weighing in heavily on the permissive side.

What caused David to not question his son’s behavior and actions? I am only speculating, but it was likely the same things that keep us from disciplining our children today. Here are a few:

1) He wanted to be his friend rather than his father. Sometimes the reluctance to discipline stems from a desire to be friends with our kids and the dynamics of healthy families gets traded in for a superficial friendship. If this is something you struggle with, remind yourself of these two things: 1) friends are plentiful for your children but loving guidance is not and 2) there will be time to build up the friendship side of your relationship when your children are grown. 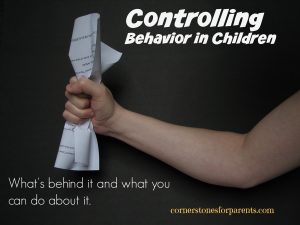 2) He made peace his primary goal. If you have a cantankerous child of your own, you know what I mean. A peaceful home is a happy home . . . at least that is what we tell ourselves. But if peace comes at the cost of godly character, it is counterfeit peace and not the kind that God calls us to pursue (Psalm 34:14). Don’t avoid discipline for fear of “rocking the boat.” You may have to deal with a meltdown in the grocery store if you say no to that candy bar. You may have to stand by your consequence when it would be easier to just give in.

3) He was too busy. It seems that we have started to wear busyness as a badge of honor. How are you? Busy. You? Yeah, I’m swamped. Have you evaluated lately why you are so busy? We addressed this in a previous article: Why are You So Busy? The Fuel Behind the Frenzy. David was running a kingdom, so he was likely quite busy. But his lack of focus on his role as a father had some serious consequences. Take some time to think about what motivates your busyness and ask God to show you what should stay and what can go in your life. Investments of time now will reap great dividends in the future.

4) He left the job to others. Sometimes we don’t have a lot of confidence in our parenting skills and think others could do a better job. Maybe this is true for you or your spouse. It is important to stay engaged with your children even if you feel that your spouse is better equipped to handle them. Take a few minutes at the end of each day to talk with your spouse about the ups and downs of your parenting that day. Brainstorm together about how you can both handle the difficult situations differently in the future. Be partners in parenting.

If you find that you are a little or a lot like David, don’t despair. We are not expected to be perfect people, but rather redeemed people. Ask God to show you the ways in which you follow after God’s heart (like David) and those areas where you tend to go your own way (also like David). And then ask Him to give you the power to change more into His likeness.

Please note: This article is for informational purposes only and is not intended to replace professional counseling. Read our full disclaimer here.