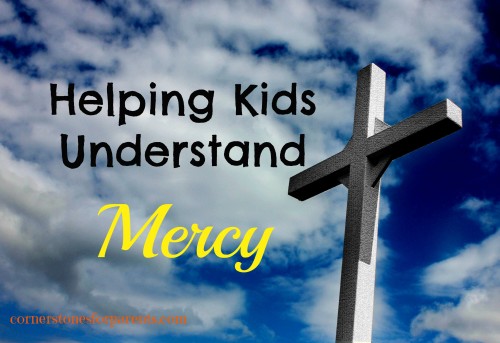 Here are some insights and tips gleaned from 2 Samuel on how you can help your children grasp and practice the godly character of mercy.

How could David, an adulterer and a murder, be a man after God’s heart? What was it about David that was just like God?

It must have more to do with who David was than what he had done.

In 2 Samuel 1:11-12, we read: “Then David and all the men with him took hold of their clothes and tore them. They mourned and wept and fasted till evening for Saul and his son Jonathan, and for the army of the Lord and for the nation of Israel, because they had fallen by the sword.”

Instead of rejoicing at the death of Saul, his enemy (the one who chased, tormented and tried to kill him several times), David mourns and weeps. David never desired to give Saul what he deserved. In fact, in 1 Samuel, he had several chances to kill Saul, but he didn’t.

In 2 Samuel chapter 9, we learn that David shows kindness to Saul’s last living heir. Any other king would have had him killed to secure his reign.

And in 2 Samuel chapter 18, we read of Absalom’s rebellion and how David deeply desired to spare his son’s life despite what he had put him through.

Again and again, David didn’t want to give people what they deserved.

Our God doesn’t give us what we deserve. In fact, He gave what we deserve to Someone else (His Son on the cross). He is a God of great mercy and it seems that David was a man of mercy – a man after God’s own heart.

Mercy can be a difficult word for children to understand. But each day presents you with an opportunity to make the concept come to life.

Make sure that you take the time to explain that this is exactly what God does for us. You are not “letting them get away with it.” You are letting them experience in a tangible way, the mercy that God extends to us through His son Jesus.

How Kids Can Show Mercy to Others

Now that your child has experienced mercy, brainstorm ways that he could show mercy to others and in so doing become a child “after God’s own heart.” Here are some ideas to get you started:

1) If someone does something mean to you, don’t treat them badly in return.

2) If someone does something mean to you, do something nice to them instead.

3) Offer forgiveness to someone who has wronged you before it is asked for.

4) Trade your large ice cream cone for a sibling’s smaller one.

5) Offer to do a chore for a brother or sister who got it as a consequence.

This short verse is packed with helpful information. It is a great verse to print out, decorate and hang on the wall as your family motto.

“He has shown you, O mortal, what is good. And what does the LORD require of you? To act justly and to love mercy and to walk humbly with your God.” Micah 6:8