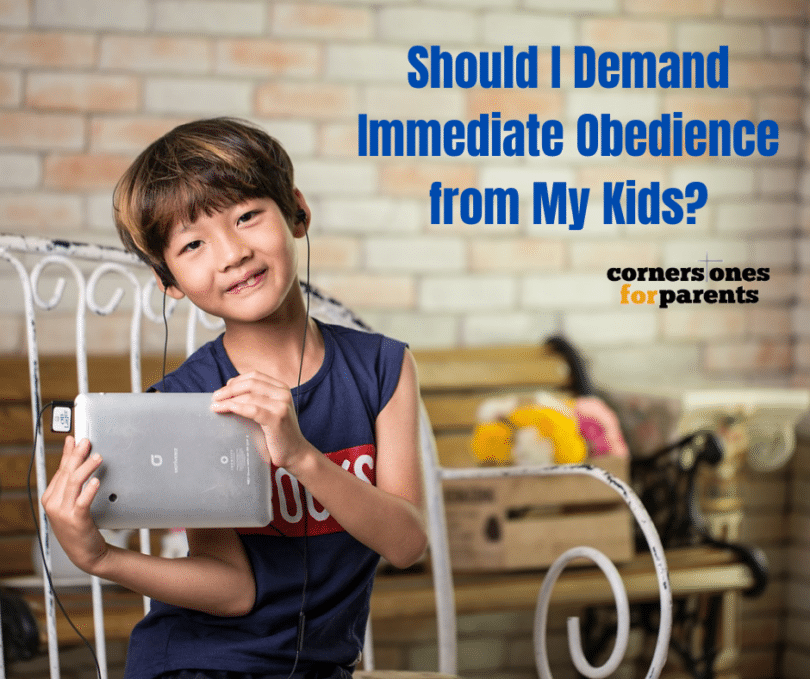 We all want kids who obey. But should we expect immediate obedience? As always, the Bible has some answers to this question. Includes a practical application.

As I read through this passage above, I was struck by the way that the Lord deals with rebellion: He warns and then leaves some space for repentance. As I read it, I wondered, Does this have any implications for Christian parents?

Some Christian parenting books will tell you that it is important to have your children obey “right away and all the way.” Or you may have heard it said, “Delayed obedience is disobedience.”

So what are we to do? Should we demand immediate obedience from our kids?

What the Bible Says About Immediate Obedience

In Matthew 21:28-32, we read the parable of the two sons. In it, the father asks his boys to go work in the vineyard. One says “No way,” but later goes. The other says, “Sure Pop,” but doesn’t go. Jesus asks, “Which son did what his father wanted?” Clearly, it was the first son. How he got there wasn’t pretty, but he obeyed.

Jonah is another example of delayed obedience. God told him to go to Nineveh, but Jonah said, “No,” and fled in the opposite direction. Subsequently, he was swallowed by a fish and regurgitated onto the shore. Soon after, that “no” became a reluctant, I’ll-do-it-but-you-can’t-make-me-like-it “yes.” Again, it wasn’t pretty, but he obeyed.

God didn’t throw up his hands and say, “Fine Jonah, I’ll find someone else.” The father in the parable of the two sons didn’t say, “You obey me right now, or you’re gonna get it!” God is not a god of immediacy. He is a God after our hearts. He will patiently work with our flaws and failings in order to pierce through the hardened shells of our hearts.

God even gave Pharaoh 10 chances. He could have said, “Let my people go!” and when Pharaoh refused, skipped plagues 1-9 and just gone for the jugular. But He didn’t. It’s not always about results with God. His plan and His purposes are much more complex.

Clearly God cares about the end-game- the resolution of his kingdom story on Earth. But He also cares a great deal about the path that gets us all there. And it’s often on the path that we learn about ourselves and Him. He illuminates the path and the path illuminates our hearts.

The Importance of Warning

I live in the northeast, not too far from the shore. I’ve seen a few hurricanes in my day. Luckily we live in a time when satellites and weather devices can predict those hurricanes long before they make landfall. God is a bit like that. We see throughout Scripture that He operates with a sort of early warning system. That was the entire job of the prophets – to warn God’s people of impending doom. But it wasn’t warning for warning sake. God wanted them to repent and turn to Him. The warnings were from a place of love and longing.

Unfortunately, most of God’s prophets were ignored, but He didn’t stop using them just because the people didn’t care to hear what they had to say. He still warned of what was to come. Sometimes individuals repented and were spared the coming judgment (in the case of Rahab). And sometimes whole nations had a change of heart and were spared (in the case of Nineveh). But many times, repentance was too long in coming and disaster was the result (in the case of the nation of Israel).

God clearly makes space for a repentant heart. As Christian parents, we can reflect this as image bearers in our parenting. This does not mean that we give our children a license to sin. God certainly doesn’t. There are often consequences when we disobey or delay obedience (Jonah had the unfortunate experience of almost drowning and being inside of a whale’s stomach for three days). Grace doesn’t erase the natural and logical consequences, but it often makes space for a warning.

Is there always time for a warning in disciplining children? What if a child is about to run into a street? Clearly emergencies and situations related to safety are not the times to create space for repentance. This idea of warnings and space to repent does not erase the idea that kids sometimes need to exercise immediate obedience.

Some may say that kids cannot be expected to know the difference. I disagree. Unless you are constantly yelling and over-reacting to your children’s behavior, they can tell when things are really serious. If you reserve your there-is-an-emergency tone to when there is an actual emergency, they will respond quickly.

How to Use a Warning System in Your Parenting

If you give your child an instruction and they refuse to comply, you can remind them of the consequence that will follow if they stay on their current course of disobedience. This doesn’t involve emotional pleas and it doesn’t involve threats. There is a difference between threats and warnings. Threats are exaggerated in order to elicit a response with no intention of follow-through. A warning is a statement of the facts as they stand and what is to come if no change happens.

Here’s an example. Let’s say your child repeatedly forgets to feed the dog. Instead of pleading or threatening you can say, “I see that you have missed feeding the dog again. Starting today, you will have until 5pm to feed him without reminders. If you don’t, you will lose your Xbox until you have fed the dog three days in a row by 5pm without reminders. What changes can we make so that you remember?”

This exchange has four parts:

1) It contains an observation of the current situation as it stands.

2) It contains a specific instruction with details of what, when, where and how.

3) It contains information about what will happen if #2 is not done, and when they can expect it to happen.

4) It contains a question related to training and partnership.

This four-part message can be used for almost any discipline situation when you are trying to get your child to start or stop a certain behavior.

Remember you don’t have to always have the right response right away. You have every right to take a minute, collect your thoughts and then present your warning. Give yourself the space and time to think it through.

I, for one, am thankful that God doesn’t require immediate obedience from me and that the Holy Spirit and my God-given conscience acts as an early warning system for my wayward heart. Let’s use His example in how we parent our kids.