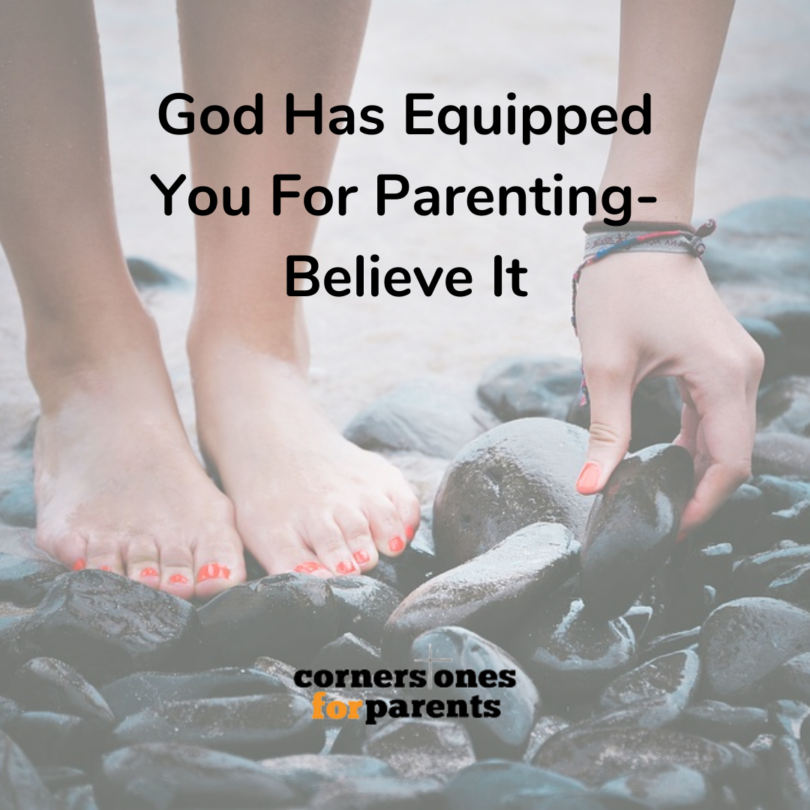 You may be struggling right now as a Christian parent, overwhelmed with your role. Let’s look to the Bible for assurances that God has equipped you for the task.

As a Christian parent, you have a call on your life to connect to (Ephesians 6:4), disciple (Deuteronomy 6:6-7) and train (Proverbs 22:6) your children. You may not have heard an audible call when you held that tiny bundle in your arms for the first time, but it is your calling just the same.

Maybe you are just starting out on this parenting journey and are wondering if you are up for the task. Or maybe you are knee-deep in the thick of parenting and feel like you know you are not up for it. But I want to give you encouragement today. You ARE up for the task. How do I know? I know, because the Lord always equips us for what He calls us to do.

Let’s look at two stories in the Bible that prove this point. Two stories with slightly different outcomes…

God prepared David for what he called him to do

In 1 Samuel 16:11, we learn that David was the youngest son of Jesse and that he was a shepherd. You may have a mental picture of Bible-time shepherds as slow-walking men with a staff in their hands and their heads in the clouds. But this is not the case. Shepherds were fiercely protective of their flock. They had an intimate relationship with their sheep and saw them as their responsibility. Being a shepherd meant you were brave, strong and never afraid of being alone.

In 1 Samuel 17:34-35, David tells Saul, “Your servant has been keeping his father’s sheep. When a lion or a bear came and carried off a sheep from the flock, I went after it, struck it and rescued the sheep from its mouth. When it turned on me, I seized it by its hair, struck it and killed it.” David was not the scruffy-haired boy our kids children’s Bibles portray. He was a brave and powerful young man.

As far as we know, God’s call on David’s life was not audible, but the force compelling him to fight Goliath was very strong. People tried to talk him out of it, but he wouldn’t hear of it. Those encounters with lions and bears were God’s way of equipping David in his early years for the task He had in store for him. And you can be sure, that if God has called you to do something, He has equipped you to do it.

We learn in 1 Samuel 17:40 that David went down to the stream and picked five smooth stones and stuffed them in his shepherd’s bag. Why five? Why not just one? After all, one was all he was going to need. But who God equips, He also assures. I believe the other four stones for were David’s benefit. God didn’t need them, but maybe David did. As they rattled around in his bag, he had assurance that he was going to get five chances to do what he was called to do.

As a Christian parent today, the future is filled with anxiety and uncertainty. But know this: when you step out in faith towards what the Lord as called you to do, He will not only equip you, but He will provide you with assurance. Sometimes even more than you need. We just need to have eyes and ears to notice.

It’s okay if you doubt sometimes, the disciples did

Now this doesn’t mean that the disciples didn’t believe in Jesus enough. Or that they didn’t think Jesus was powerful enough. They had faith in Jesus. They left everything for Him. But they had wavering faith in their call. In Luke 9:1, Jesus “called together his twelve disciples and gave them power and authority to cast out all demons and to heal all diseases.” All demons. All diseases. Not some. All. But there was some nagging suspicion at the back of the disciples minds’: Did Jesus really mean all? What about the really powerful ones?

They doubted that God would equip them to fulfill the call on their lives. The heard Him, but didn’t fully believe.

God has called you to this honorable role of parent. Do you believe that He has also equipped you as well? When you reach down into your pocket, can you hear those stones jingling around as a reminder of his abundant grace to you?

You may have very little parenting experience. You may have grown up in a home with less-than-stellar parental role models. That doesn’t matter. God has called you, and He will equip you for the task. Look around for the assurances that this is true. What support systems has He provided for you? What does God speak to your heart when you read His word? What promises in His word can you cling to?

Christian parenting is an exercise of faith. It is easy to become consumed with doubts, fears and worries. But God, who has called you, equips you and assures you. Believe it.