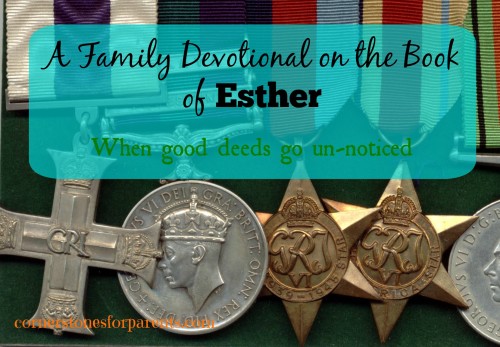 A family devotional guide on the Book of Esther that addresses the need for recognition for good deeds. Includes resources for younger kids.

Esther is a wonderful book of the Bible that reads like a modern day television drama. It is filled with intrigue, murder, deception and power. One of the subplots has to do with recognition – or lack thereof. This is a relevant theme for our kids today as most young people are living their lives with an invisible audience – constantly seeking feedback, approval and recognition for what they have done, no matter how big or small. How can we, as parents, combat this external focus and help our children develop an identity that goes deeper than what others may think of them? How can we teach them to do good for the right reasons?

The lesson below will explore some of the themes of Esther and help you and your family dig deeper into this issue of recognition. You can use the lesson below as a family devotion.

As a family, read the book of Esther then explore the questions below. At the end of this article, there are some links to resources to use along with this study if you have younger children.

Exploring questions on the book of Esther

Application questions about the book of Esther

“Be careful not to practice your righteousness in front of others to be seen by them. If you do, you will have no reward from your Father in heaven. So when you give to the needy, do not announce it with trumpets, as the hypocrites do in the synagogues and on the streets, to be honored by others. Truly I tell you, they have received their reward in full. But when you give to the needy, do not let your left hand know what your right hand is doing, so that your giving may be in secret. Then your Father, who sees what is done in secret, will reward you.” Matthew 6:1-4

Encourage each family member to try to do one or two un-noticed good deeds every day for the next week. Make it a goal to not get caught. At the end of the week, meet together and talk about the experience. Discuss what made it hard or easy and how they felt knowing that God was the only one who saw.

Coloring pages on the book of Esther