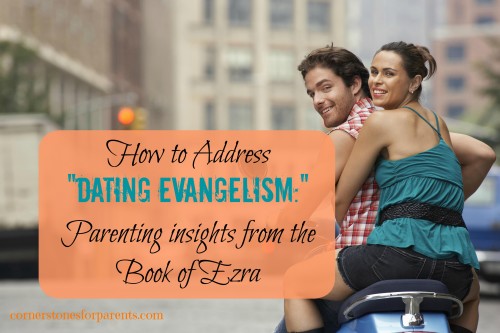 What is a parent to do or say when their child wants to date a non-Christian? Here we address the idea of “dating evangelism” with some insights from the book of Ezra.

Have you heard the term “dating evangelism?” If not, it is just what it sounds like. It is when a Christian dates a non-Christian with the hopes of converting him or her to the faith.

What are parents to say when their Christian child comes to them and announces that he or she is dating or thinking of dating a non-Christian? Your child may even make a good argument as to why this is a good idea, citing some “case studies” when it has worked for others. What should our response be?

As in all areas of life, the Bible offers some help and we can find some guidance on this issue in the book of Ezra.

An Overview of the Book of Ezra

Chapters 1-8 of the book of Ezra are a combination of hope and excitement as well as frustration and disappointment. The Israelite exiles are finally able to return to their precious Jerusalem with the blessing of King Cyrus. But the city has come to ruin and repairs to the walls and the temple prove difficult. But they persevere and finally complete their sacred temple, a mere shadow of its former self.

It is into this setting that Ezra the priest returns to Jerusalem to establish and organize temple worship. Upon arrival, he learns that sin has crept back into the hearts of the first wave of exiles who had returned 80 years before. They have intermarried with the pagan inhabitants around them. In effect, they resumed the practices that got them into trouble in the first place.

When Ezra hears of this, he tears his clothes and gives a public, heart-wrenching prayer. You can read it here. It is quite powerful.

Then something pretty amazing happens. The people are convicted of their sins, make a statement of belief, decide to divorce their pagan wives and send their families away, and ask Ezra to get up off the ground and tell them what to do next (Ezra 10:1-4).

How can this help us as parents? Let’s first take a look at the concept of being unequally yoked.

Being unequally yoked is a big deal to God (see 2 Corinthians 6:14). This goes for all kinds of relationships, not just dating or marriage. Of course, this doesn’t mean that we cannot associate with unbelievers. A quick look at Jesus’ life shows us that most of His time was spent with unbelievers. But the people Jesus was “yoked” with on earth (His disciples and His friends), were those who followed Him and loved His Father. We should not shelter or prohibit our children from creating friendships with non-believers but we need to provide guidance and information about the parameters of these different kinds of relationships.

Your child may cite a situation where a friend’s boyfriend came to know the Lord through their relationship. It is true that God can use already existing unequally yoked relationships to turn people to him (see Peter’s comment to wives in 1 Peter 3:1). God can use anything for our good and His glory (Romans 8:28). But just because God is able to redeem wayward situations does not mean that is part of His design. There is a qualitative difference between “testimonial” relationships and mutually inspiring Christian relationships. We can help our children identify the differences between the two. Here are some ideas for discussion:

When Ezra saw their sin, he prayed. That was his first response. He didn’t lecture them or call a meeting. He prayed. And he prayed publically and with fervor. So much so that it drew a crowd.

We can do the same with our children who are involved in unequally yoked relationships.

We can engage in fervent and passionate intercessory prayer on our child’s behalf. We can pray with, over and next to him. It is okay for him to see us asking for God’s will to be done in his life. But here is a word of caution: check your heart. It can be all too tempting to pray in front of our children with an agenda- choosing your words for their benefit rather than pouring your heart out to God. Manipulative prayers have no place in the Kingdom.

Next, I think it would make sense to study this passage together with your child. Talk about the sin the Israelites committed, the impact it had, why God prohibited it and the people’s response. Point out that some real sacrifices were made to redeem the situation. These men were permanently parting ways with their wives and children, their families whom they loved. Over the course of three months, those families were dissolved. When we put God first, our priorities get rearranged and sacrifices often have to be made.

Notice here that the men who repented of their sins were not forced to act in this way. They had a real change of heart for the Lord. We might be able to force our children to obey, but we run the risk of creating “white-washed tombs” – kids who look good on the outside, but have no change of heart on the inside.

Finally, have your child spend some time evaluating her different relationships. If her life is devoid of any mutually fulfilling Christian relationships, “dating evangelism” may be her attempt to fill that void. Talk about ways you can help her connect and develop deep friendships with other believers her age.

We are meant to live in community with other believers. Work together with your child to build and support that community.