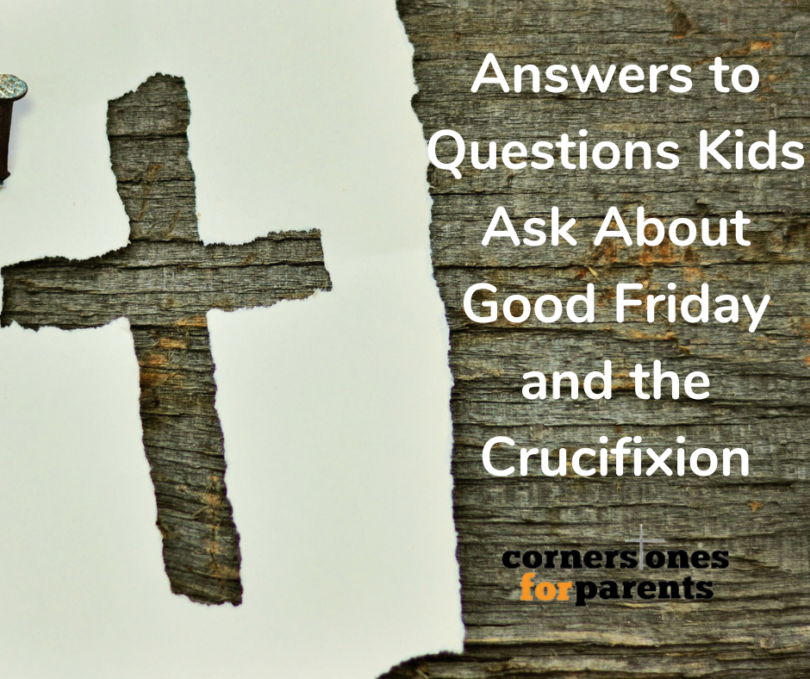 It can be hard to answer kids’ questions about Good Friday and the Crucifixion. It’s good to be prepared if they do. Here are four common questions kids ask and some kid-friendly answers.

Do you struggle to answer kids’ questions about Good Friday? You are not alone. Here are four common questions that kids ask and kid-friendly answers. As I have said before, we need to use discretion, modifying our language and use of detailed imagery in a way that respects the age and developmental level of our children. Children’s hearts are not softened in the same ways as adults. The details of the crucifixion may bring you to a state of repentance – but don’t expect the same from your kids.

Why didn’t Jesus just get down from the cross if He was God?

This is not a new question. In Matthew 27:39-44, we learn that many people – common people, priests, and even the criminals next to Him – mocked Him with this same question. Jesus didn’t stay on that cross because He couldn’t get down.

He stayed on the cross because He wouldn’t get down.

Imagine if you held your hand above a candle flame. Once it got hot, you would move it away. You have the power to make the pain stop. Jesus had the power to make His anguish stop too, but He didn’t. That’s because it wasn’t the nails that held Him there. It was love.

Why did Jesus have to be killed? Why couldn’t He just die a regular death and then come back to life?

Jesus’ death had to happen the way it did for two reasons.

First of all, God had established a pattern – sin could only be washed away by blood (that is why the people in the Old Testament sacrificed animals). Dying a natural death would not have been a sacrifice. Jesus’ death meant something because He gave His life up. It wasn’t taken from Him.

Secondly, people are, by nature, very skeptical. Jesus’ death had to be very public and obvious so that there could be no question that He was actually dead. The Bible even points this out for those who might have argued that He was just sleeping. In John 19:33-37, it is recorded that the soldiers did not have to break His legs to speed His death – He was already dead when they got there. To erase any other doubts, John tells us that His side was pierced and blood and water came out (again, use your discretion with this piece of information).

A “regular” death would have created too many problems. God wanted there to be no doubt in anyone’s mind that Jesus was who He claimed to be – the Lamb of God who takes away the sins of the world (John 1:29).

Lots of people were crucified back then. Why do we talk so much about Jesus’ suffering? What was different about His death?

When Jesus said that His “soul was overwhelmed with sorrow to the point of death” (Matthew 26:37) in the Garden of Gethsemane, it wasn’t only because of the future pain of the crucifixion (even though, as God, He knew exactly what it would feel like). Many people had faced that exact same fate. His sorrow was because He carried the burden of sin for every human being.

Have you ever done anything wrong and then felt really guilty or bad about it? Jesus was overwhelmed with sorrow because God put on Him the consequences of sin for all people of all time. He felt that guilt and sorrow for everyone. God charged Him guilty instead of us.

Where was Jesus during between Good Friday and Easter?

If you are talking about Jesus’ body, it was in the tomb. It never left until He was resurrected. Jesus’ spirit (the part of us that goes to heaven and holds all of our memories, feelings and love for God) did not stay in the tomb. 1 Peter 3:18-19 indicates that He was in Hades for at least a part of this time – not as one who was being punished, but to preach to those who were there. Grown-ups don’t agree on this because there isn’t much information in the Bible about this. We can know for sure that the Bible contains every piece of information that we need to know to follow Jesus. It just may not have the pieces of information that we want to know.

It seems that God wants us to focus more on what Jesus did on the cross and what happened after His resurrection than what happened in between.

Your kids may have other questions. If you don’t know the answers – that is okay. We don’t have to have all the answers. We simply need to point them to the One who does.